It’s with a heavy heart that we inform you that we have decided to cancel the 2020 Equali-Tea due to concerns over the rapid spread of COVID-19. AAUW-Murfreesboro is devastated by the news. However, we understand the importance of taking this precaution. We were looking forward to an evening of fellowship as we shared in the words of Dr. Mary Francis Berry and celebrated Tempest Award honoree Dr. Carmelita L. Dotson. In an abundance of caution, the Equali-Tea organizing committee has decided not to reschedule. We invite you to make a donation to the Middle Tennessee Fund for Women and Girls to help fund our scholarships and programs for the next year. Look for the Tea to return in 2021.

You can make your donation here.

Two Murfreesboro leaders have stepped up to lead the Murfreesboro branch of the American Association of University Women as it presents Equali-Tea: A High Tea in March on MTSU campus.

Chaired this year by Elizabeth McPhee and Tara MacDougall, the fourth annual Equali-Tea is a social, fundraiser, and educational program all in one. The (hats optional) High Tea raises scholarship funds for MTSU college women students, and also marks Equal Pay Day, the day that symbolizes how long women must work to earn what men earned in the previous year.

“AAUW was proud when Liz McPhee accepted to be one of the co-chairs for our 2020 Equali-Tea. Our organization knew that she would bring the passion that she has brought to our community for over 40 years, where she has advocated and supported women, families, and education,” said Barbara Scales, co-president of the AAUW-Murfreesboro branch.

“Tara has been a leader in the Middle Tennessee community for years,” James said. “We are thankful for her work advancing educational opportunities for girls at the Discovery Center, where she helps connect and inspire children of all ages.”

Can’t attend? Please consider a donation in the amount of $50.
Donate

During her career, McPhee has been a classroom teacher in public schools in four different states, including Metropolitan Nashville-Davidson County Public Schools, and Murfreesboro City Schools. After more than 30 years of teaching, McPhee retired in May 2014. McPhee is actively involved in the community. She is a member of Belle Aire Baptist Church, Alpha Kappa Alpha Sorority, Inc., and Delta Kappa Gamma Sorority, Inc. and currently serves on the MLK Board and the Murfreesboro City Schools Foundation Board. She also served on the Cannon County Center for the Arts Board and the Domestic Violence Board.

McPhee is married to Sidney McPhee, who has served as president of MTSU since 2001, and they have two adult children, Seneca and Sidney-Anthony.

Her numerous volunteer activities were recognized by the Rutherford County Chamber of Commerce when she was awarded the 2002 Pinnacle Award. Her leadership role with the Discovery Center at Murfree Spring was singled out by the Center for Nonprofit Management in Nashville when she was named the 2007 Board Member of the Year for Middle Tennessee. In 2013, she graduated from Leadership Middle Tennessee. In 2014 and 2016, MacDougall was recognized as an ATHENA nominee and in 2015 she was a recipient of the Women in Business award.

MacDougall is a member of the Rutherford County Industrial Development Board, and past-President of RUTHERFORD Cable.

Dr. Mary Francis Berry is the keynote speaker for the 2020 Equali-Tea.

A native of Nashville, Berry is an American historian who is currently the Geraldine R. Segal Professor of American Social Thought and a professor of history at the University of Pennsylvania.

During her remarks, Berry will address “Women & Voting: A Mandate for Elected Officials.”

She has served as chairwoman of the United States Commission on Civil Rights, board chair of Pacifica Radio, president of the Organization of American Historians, provost of the College of Behavioral and Social Science at University of Maryland, College Park, and chancellor of the University of Colorado at Boulder.

As a young student, Berry attended Nashville’s segregated schools, graduating with honors from high school and attending Fisk University in Nashville, where her primary interests were philosophy, history, and chemistry. Berry transferred to Howard University, where she received her bachelor’s degree. Following this, Berry studied at the University of Michigan, where she received a Ph.D. in history. She has a J.D. from the University of Michigan Law School.

Berry has received 33 honorary degrees. In 2008, she received the Foremother Award from the National Center for Health Research. On May 19, 2016, Dr. June Manning Thomas was named the Mary Frances Berry Distinguished University Professor of Urban Planning at the University of Michigan.

The Equali-Tea raises scholarship and programming funds for the Middle Tennessee Fund for Women and Girls, a nonprofit organization in support of the mission of AAUW Murfreesboro, which is to level the playing field for women and girls in education and in the workforce.

The funds raised go toward two AAUW Murfreesboro scholarships that are offered to MTSU students.

The Ruth Houston Memorial Scholarship supports women 24 years and older who are returning to finish their undergraduate degree. Applicants must demonstrate academic promise and financial need.

In 2015, the group marked its 100th anniversary by creating a second scholarship, named for long-time AAUW members Mattie Butler and Leola Fouts.

The Butler-Fouts Memorial Graduate Scholarship is presented to female graduate students from underrepresented ethnic or racial groups. Applicants must demonstrate academic promise and financial need as well as be enrolled in a graduate program at MTSU.

The event is also the stage for the annual presentation of the Tempest Award, which is given to a community leader who has worked to better the status of women and girls in Tennessee.

Despite comprising 17.8 percent of the armed forces, women continue to face obstacles both during their military service and after, and support systems have sometimes lagged.

This was something Beverly Groogan faced when she quickly transitioned from flight nurse to mom when returning home from deployment.

“I went from 100 mph to a stop. I was expected to be Mom again,” she said at the inaugural Women Warriors Celebration, held Tuesday night, Nov. 5 on MTSU campus.

Groogan was the keynote speaker at the event that was organized by AAUW-Murfreesboro branch to celebrate women veterans.

Event organizer L’Oreal Stephens said she was inspired to create the event in advance of Veterans Day after she learned about the needs of women veterans.

“We’re doing this to say ‘thank you for all you do,’” said L’Oreal Stephens, a co-organizer of the event and a lecturer in MTSU’s Department of Communication Studies.

Stephens said the honorees were saluted not only for their military service but also their continuing devotion to making life better for other people.

“These women are parents and students and spouses and employees and business owners, and they’re also giving back to their own communities after their military service,” Stephens said.

During her keynote, Groogan, who works as Women’s Health coordinator and Maternity Care coordinator at the Alvin C. York Veterans Administration Medical Center, spoke about “moments frozen in time.”

She recounted the patients who left an impression on her during her service as a flight nurse during Operation Iraqi Freedom. She told stories of success and failure, stories of miraculous recoveries and heart-wrenching losses on the battlefield.

“Our goal was to keep him alive until he could say goodbye,” she said about a mortally wounded officer.

Her career with the U.S. Air Force wasn’t easy. There weren’t the same reintegration or mental health support that returning military veterans get today.

She made the transition from battlefield medicine and back to her family many times from 2005-2013, spending one week to one month at a time deployed to war zones and escorting wounded soldiers from the battlefield to Germany and back stateside.

“It took me years to accept these stories as a part of my life and part of what makes me the person I am today,” Groogan said.

For many women warriors, they don’t know when and how to get the help they need.

Groogan said all they need to know is that she’s there for them at the York VA. 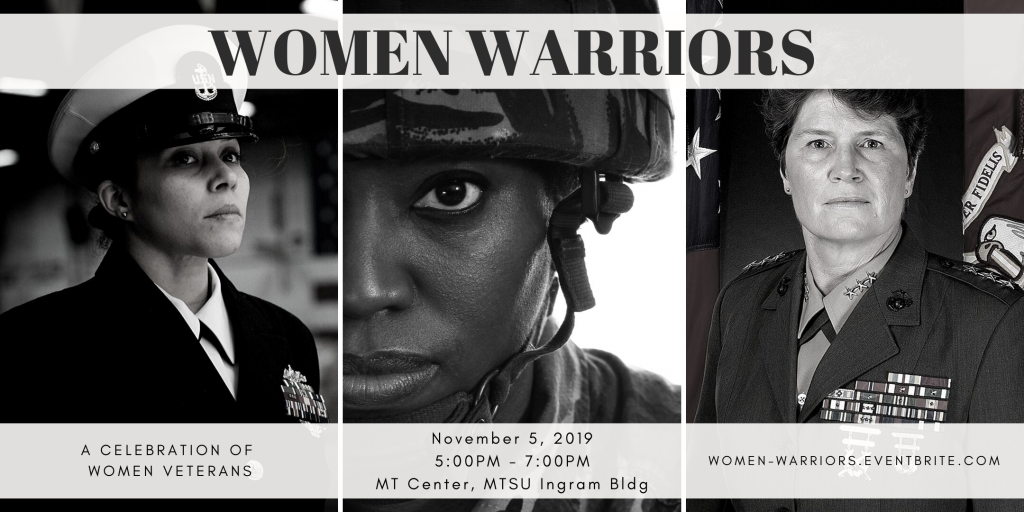 Join us for an evening of celebration as we honor Women Warriors.
Local veteran’s organizations are nominating women veterans in the community who stand out in their service through the military, volunteerism, family, and business. We will celebrate their work with food, drinks, and gifts.

We’re excited to announce that our keynote speaker is Beverly Groogan, RN BSN. Ms. Groogan, an Air Force Veteran, is the Women’s Health Coordinator and Maternity Care Coordinator at the VA in Murfreesboro, TN. All women veterans are invited to attend. Nominees are encouraged to bring their family and friends to share in the celebration! Members of nominating organizations are invited as well. Please RSVP by Friday, Nov. 1st so we know to expect you.

Hosted by the American Association of University Women (AAUW) Murfreesboro. Sponsored by the MTSU June Anderson Center for Women and Non-Traditional Students, the MTSU President’s Commission for the Status of Women, the MTSU Charlie and Hazel Daniels Veterans and Military Family Center, and the MTSU Office of Institutional Equity and Compliance.